A tough day for Tim and Tom Coronel

Today was a day of extremes in the Dakar Rally. Competitors took the start at temperatures of over 35 degrees. A few hours later, however, hats and gloves were anything but a luxury as the mercury only rose to about five degrees. Above all, this was the effect from the huge mountains that had to be conquered. From an altitude of 1,400 metres to well over 4,000 metres, with a peak at more than 5,000 metres above sea level. The summit was reached during the neutralisation of the stage. That effectively split the stage into two parts: a first part of over 200 kilometres, a long neutralisation and then another part of more than 100 kilometres to make it to the finish. All in all: a long and demanding day.

That was the case for Tim and Tom Coronel as well. The day started off well with a good pace, but halfway through the first section, Tom’s car came to a halt with clutch problems. He got a tow from his brother and thus, the two reached the start of the neutralisation. For the second half of the special stage, Tom opted for a tow from the Boucou fast service assistance. Tim made it to the bivouac under his own power, albeit at a considerably delay due to the tow he gave to Tom. 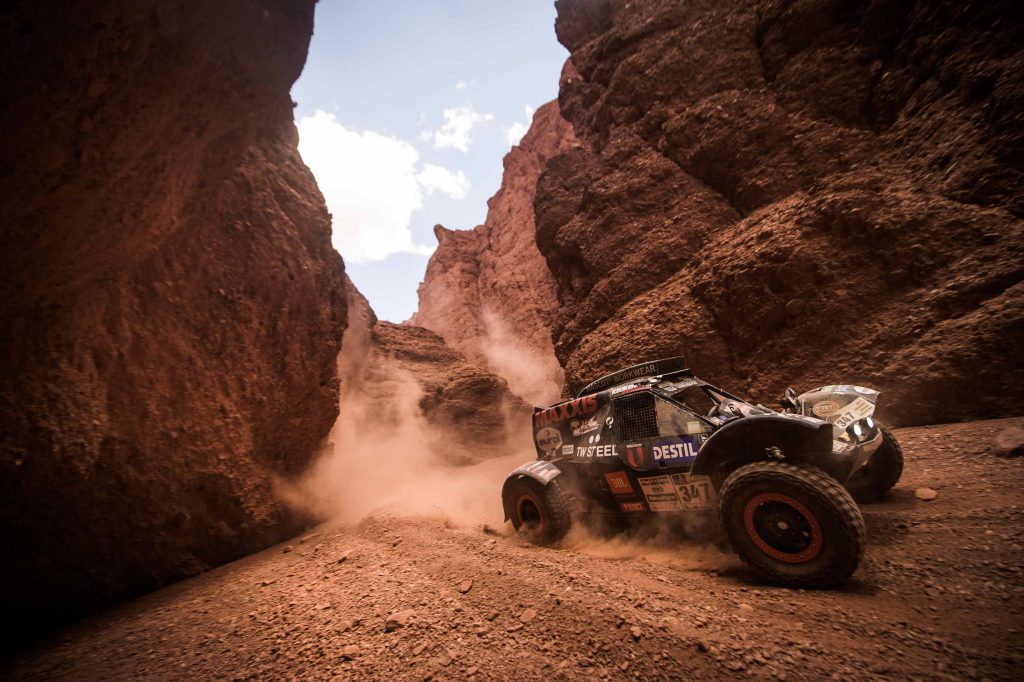 “This was a peculiar stage,” Tom reflected. “At the beginning, things were going well, I was among the big cars. I made it through the first part with fesh fesh fairly easily. Then, the clutch started slipping. That was bad, because you can’t drive the buggy upwards in the mountains like that. Tim was brilliant, he stayed with me all the time and helped me with everything. He pulled me through, in every sense of the word, because he gave me a tow for a huge part of the stage. Up until an altitude of 3,500 metres in the mountains, because that was where the tiny engine gave in due to lack of oxygen. There, a Landrover came by that took me to the top. From there, I was back behind Tim. For the second part of the special stage, Boucou towed ne. Now, we are here in the bivouac, we have to repair the car quickly and then we get going again. All in all, it was a peculiar day. Mixed feelings, but everything feels well. We made it and we won’t give up! Everything will be all right. Let’s get on to Bolivia!”

Tim added: “The stage started very well. In the part with the fesh fesh, somebody’s car suddenly got stuck, so I had to take avoiding action and ran into a ditch. That cost me quite some time. Then, I was stuck between other competitors, but I was able to overtake a few people on the left and on the right. Then, all of a sudden, I saw Tom’s car standing near a vineyard. He had clutch problems. We weren’t able to fix that ourselves quickly, so we decided that I would give him a tow. That didn’t go perfectly up in the mountains, but fortunately, there was somebody else who took Tom to the top. Then, I pulled him to the start of the second part of the special. There, Boucou was waiting. Some improvisation was needed because the trucks were taking a different route for the first part, so we had to make sure we made it to the start of the second part by ourselves.”

In spite of the difficult day, there is no lack of motivation: “There is no way for a Coronel to give up quickly, so we are back again. And there is only one goal: getting both buggies to the finish, and that is what we will achieve!”

Competitors will reach an altitude of around 3,500 metres above sea level, at which they will be driving for the next six days. Only few have already encountered the huge dunes at this altitude. They require excellent climbing skills. Navigation is running at maximum speed with the many changes of direction in the Bolivian part of this special stage.