AREQUIPA – Tim and Tom Coronel have mastered the longest day of the 2018 Dakar Rally without too many problems. In total, 267 kilometres of special were scheduled, split up into two parts. The first part, with another 50 kilometres through the desert of Peru, again caused many victims. Peugeot’s star driver and title candidate Sébastien Loeb was one of the drivers who had to retire after two incidents. Even for 13 times’ Dakar winner Stéphane Peterhansel, it was tough: “It was extremely difficult,” the Frenchman commented. “These were the most challenging dunes of this Dakar Rally. Once you get stuck, you never can make it out again.”

While many competitors again had to deal with major problems, the twin brothers did it very well. Tim and Tom also had to get out of their car a few times in order to get the Jefferies Buggy from the loose sand. “Man, these were some dunes. Extraordinary,” Tim said after the stage. “I understand why they made the dune part of this stage only 50 kilometres. It was incredibly tough. This is my fifth Dakar Rally, but I have never had such a challenging dune stage like this. Incredible. We got stuck twice. The first time, we lost a plate. The second time, I borrowed a plate from another guy who had also got stuck 100 metres ahead. I moved an entire mountain 150 metres before we were able to continue, unbelievable. But we have made it and that is what counts. And we hardly had any issues with the car, so that bodes well for the next days.”

On the second part of the stage, things got exciting once again as the brothers suddenly found themselves on their side following a miscommunication in the cockpit, but in typical Coronel style, they remained unfazed by this as well. Tim explains: “We were in the middle of a path that everybody had to pass, so we were lucky in that respect. The guys behind us had two options: either they came to help us, or they had to wait a very long time, so that was helpful. Ton van Genugten got us back on four wheels again. I invited everyone who helped us to join us for a beer in the bivouac. All in all, we lost about one hour, but before and after that, things were going fine. The problems with the car we had on the first days have been cured, so nothing to worry about.”

For those back home, it was difficult to keep track of Tim and Tom because the two didn’t feature in the timing from the organisers. “We will investigate why that happened. Otherwise, we will continue to fly nicely under the radar,” Tim concluded with a smile. 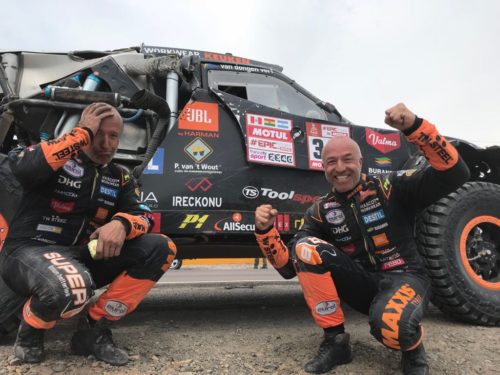