Tim and Tom Coronel back in the civilised world

After a few days with torrential rain, the Dakar community made it to La Paz, the capital of Bolivia, in a convoy. There, the rest day was spent on Sunday, allowing the competitors to recover and to get the equipment back in good shape again.

For Tom Coronel, the past days were tough. Early on the stage on Saturday, he had clutch problems on his car that had to be towed. The tow bar at the front of the buggy broke several times. In the mean time, conditions became worse and worse with heavy rain. That turned the route into a muddy affair with competitors getting stuck everywhere. Even the Boucou assistance truck got stuck while attempting to get other cars moving again.

Due to the worsening weather conditions and the many delays, it became impossible to reach the bivouac, so that Tom had to spend the night in the bad conditions on the stage. After a long and cold night, a one-hour walk to a truck from the organisation followed to get water and a huge dose of oxygen. To make things even worse, hail, rain and thunderstorms set in again. Late in the evening, Tom and his fast assistance crew finally made it to the bivouac where Tim was present to welcome them with a bottle of champagne.

“I am so glad that I have made it,” a relieved Tom reported. “In fact, this was a bit too much again. Several times, I thought that this was it, that I was done. But this proves once again that you should never give up, ever! Mud, rain, hail, thunderstorms: we had it all. The water in the buggy was half a metre high, it was ice-cold and I was knackered, but I made it. And now for the next stage!” 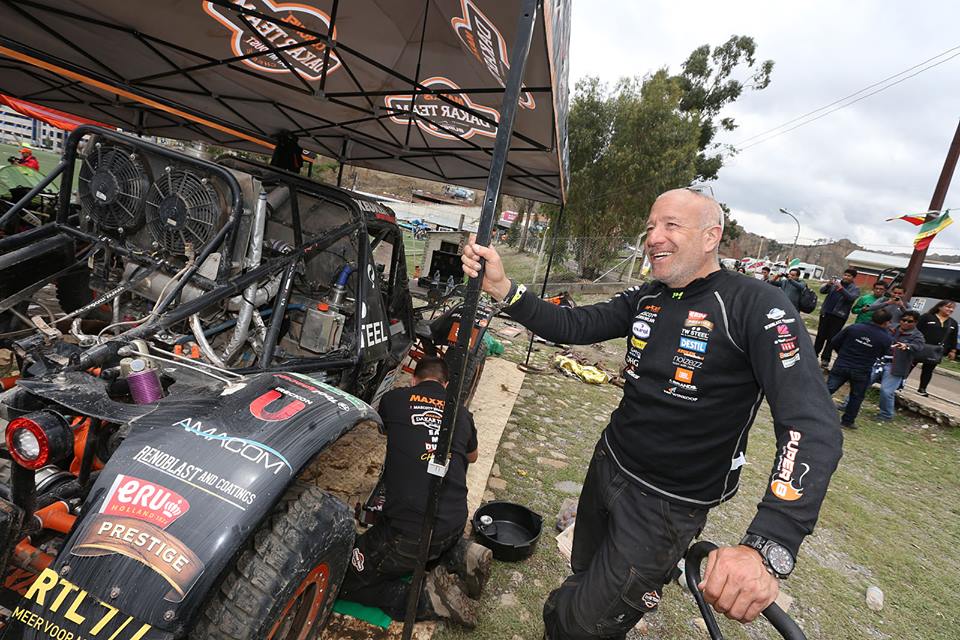 After Friday’s shortened stage, Tim made it to the bivouac in time, but due to the adverse conditions, the organisers had closed the camp. Therefore, he had to wait for hours for the Coronel Dakar Team crew to arrive. Conditions were such that the stage on Saturday was cancelled. He joined the convoy to La Paz where competitors got a warm welcome from the crowd: “So much enthusiasm, really great. That is just what we needed after Tom’s adventure. I am really glad that he is with us again and that he is okay. We were worried for quite a few hours, but that is Dakar for you.”