San Juan, January 14th 2016 – Fesh fesh, stones and long quick paths were the ingredients of stage 11 from La Rioja to San Juan. Another real Dakar day, that was shortened for the bikes because of the heat. Tim Coronel had a fine day and defied all the elements to finish as 27th. With two days to go the finish of Dakar 2016 comes close, but Coronel isn’t thinking about that. 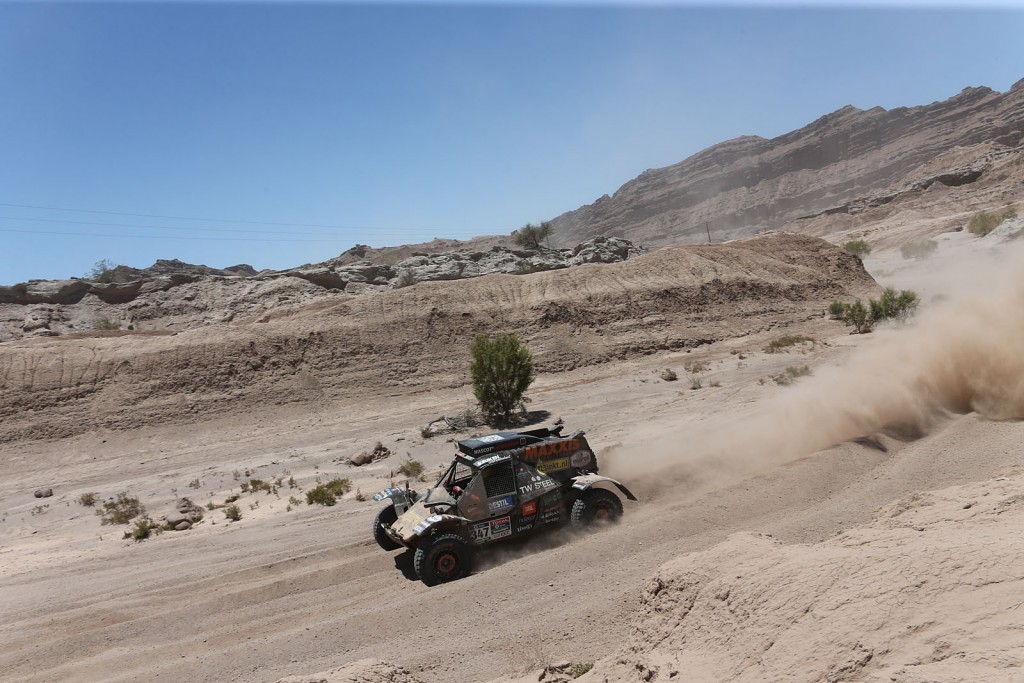 “It was another real Dakar stage today. It was tough and hot, but my buggy did not budge at all.” Tim tells us after the stage. “The last couple of days I had no real problems and that feels good. I can finally show the buggy’s potential and I like that. It seems the harder the stage, the better my baby is doing. During yesterday’s stage it all went very well. When the buggy has no problems I can concentrate on driving and navigating instead of working on it for the entire stage. The same goes for my Maxxis tyres. It’s crazy how many cars I’ve seen with flat tyres, while I could just go. It makes a huge difference, have you ever tried changing tyres when it’s 40 degrees? The only problem I had yesterday was a jammed caliper,  but I disconnected it before I drove to the bivouac.”

Today’s stage wasn’t easy. There was a lot of fesh fesh and Tim doesn’t really like that: “Pff, the fesh-fesh on some parts is really tough. It’s so soft, it’s like cement and I just can’t get through. I saw a lot of people struggle with it so I went to drive next to the path. Not the most comfortable solution, but I made it. It was an alternating stage with beautiful dry rivers and then long straights with stones. Starting early makes a difference for me, because the stage isn’t yet rutted when I drive there. I had a great day and look forward totomorrow.”