LA PAZ – The Coronel brothers have mastered the sixth stage of the 2018 Dakar Rally without major problems. The stage included a neutralisation halfway for the crossing of the border between Peru and Bolivia. After that, the duo continued its road towards the bivouac at a decent speed. There, a nice reward was waiting: a well-deserved night in a hostel with a shower and the subsequent rest day! 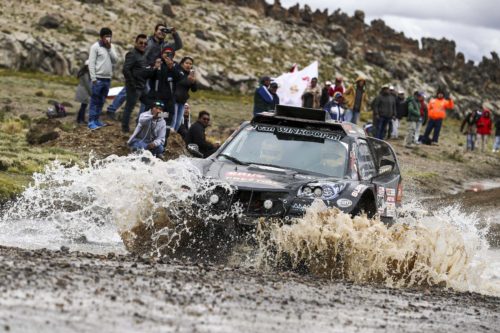 “Once again, it was a tough stage,” Tom reflected. “The first part mainly included rally roads. Tim had found a great rhythm and the car was running smoothly. We were going really fast, we were overtaking many other competitors. Towards the neutralisation, however, things did go wrong briefly. We thought that we had a puncture at the rear, but that didn’t turn out to be the case. The pressure in our tyres was too low, so that the tyres simply came off the rim. A mistake by us. We were holding our breath in the cockpit for a while. At the border, we stopped at the Mini assistance team. There, we borrowed a compressor and the tyres were back on the rim just like that, no problem whatsoever.”

Tim was running at a good speed again when there was a stretch with a lot of mud. “Fifty kilometres with mud! We were thinking: ‘This really is impossible’, but we still had to make it through. The windscreen misted up regularly, so we did it slowly while Tom was trying to keep the windows clean from the inside. Maik Willems shot past us, he was going three times faster than we were. The final part of the stage went well again and thus we made it to the finish just before darkness fell.”

A warm reception in Bolivia

The most beautiful moment of the day happened after the finish: “We were driving towards La Paz. People along the road to the left and to the right for 40 kilometres, really unbelievable! Shouting, waving flags, real Dakar freaks. The pope would have been envious.”

After a brief podium ceremony, the reward awaited. The entire team was able to spend the night in a hostel owned by a Dutchman living in La Paz. Finally a proper bed, a warm shower and a decent meal. Tom: “I saw my pillow and I was out straight away. Apparently, I was in need of some sleep…” 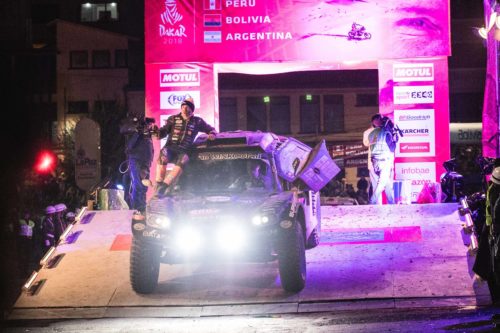