PISCO – Tim and Tom Coronel have completed the eighth stage of the 2019 Dakar Rally without any problems to speak of. The duo finished nicely among the top 25.

The end of the marathon is gradually getting closer. That doesn’t mean that things are getting easier for the competitors. Looking too far ahead can be fatal in the treacherous Dakar Rally. Tim and Tom Coronel are experienced enough and know the tricks of the trade. That made them safely reach the finish of the eighth stage on which several teams found their Waterloo.

Nevertheless, the first few kilometres in particular turned out to be tough. “It was quite foggy which made it really dangerous. Sometimes you couldn’t really see a thing. That made it really tricky and that was a bit scary indeed. Fortunately, visibility improved later on,” Tim admitted. Co-driver Tom added: “The dunes were again really, really high. We saw Van Loon and Ten Brinke having got stuck and we got stuck once at the top of a dune ourselves as well. I got out of the car to dig, Tim moved the car back- and forward. The starter didn’t work, so we had to try to get loose with the engine running. Fortunately, that worked out pretty quickly.”

After a troublesome sixth stage, the brothers are now back in full swing. ‘The Beast 2.0’ is doing better and better in the vast valleys of South America. Tom: “Tim is getting a better feel for the car by the day, he is driving more nicely every time. What a great machine this is, and what a potential for the future! It is sheer joy every day!” 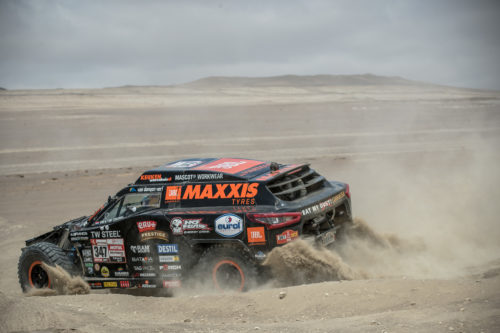 Wednesday’s stage is a tour around Pisco: 410 kilometres, including 313 kilometres of special stage. That is the last serious stage, although over 100 stage kilometres also have to be completed on the final day.